All spoilers for Shenmue will be left unmarked. You Have Been Warned! 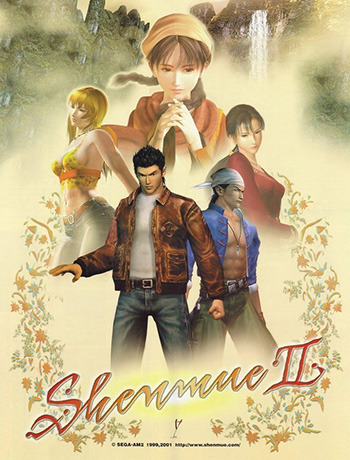 The story goes on...
Advertisement:

Shenmue II is the 2001 sequel to Shenmue, produced and directed by Yu Suzuki and developed by Sega-AM2.

Released on the Sega Dreamcast toward the ends of its life and then ported to the Microsoft Xbox the following year, the game follows Ryo Hazuki as he arrives in Hong Kong to find Lan Di and avenge his father's death. But first, he must seek out Lishao Tao, the martial arts master who can help him discover the whereabouts of Yuanda Zhu, the man who sent Ryo's father the letter warning him that Lan Di was coming for him. However, Ryo quickly discovers the dangers that lie within Hong Kong, and not everyone is willing to give him the answers he seeks. Will he find Lan Di and avenge his father's death, or will his desire for vengeance lead him down a dark path that will ultimately destroy him?

While the general gameplay was mostly similar to its predecessor, the sequel tried to be far more action-oriented than the slightly plodding original. In addition to the plot's pacing, the sequel also has much more combat, with fights being more common (both story-related and optional). As Ryo has no place to call home in the unfamiliar city of Hong Kong, he must find ways to make money in order to survive on the streets. Aside from a part-time job, Ryo can also engage in several Betting Minigames, engage in arm wrestling and participate in underground street fighting to earn money.

Developed in conjunction with the first game, as the developers were perhaps clear in the knowledge they wouldn't release as many games as planned, the second game attempted to cram much more of the story in. Shenmue II covers numerous chapters that take Ryo throughout Hong Kong, including Aberdeen, Wan Chai, and the dangerous walled city of Kowloon, followed by the beautiful mountain forests of Guilin. On Ryo's search he meets Joy, a rebellious biker who helps him survive on the streets, beautiful martial arts expert Xiuying, who tries to dissuade him from pursing his quest for revenge, and the charismatic gang leader Ren, all leading up to the destined encounter with the mysterious girl that appears in his dreams.

In Hong Kong, Ryo learns that Yuanda Zhu has gone missing, and that the Chiyoumen have hired the crime organization known as the Yellow Heads to seek out and capture him. Making several friends and enemies along the way, Ryo discovers that Zhu is hiding in Kowloon and must get to him before the Yellow Heads do. After a climatic battle against the gang, his quest takes him to the forests of Guilin, where he meets Shenhua Ling, who leads him to the place where the jade for the mirrors was mined. The second game left us with many unanswered questions and a cliffhanger, one that would be unresolved for several years.

The game had a troubled release, with the Dreamcast's NA version cancelled barely more than a month before the scheduled release date due to the console being discontinued and the subsequent deal with Microsoft, which had interest in bringing the game to their console. As a result, even national chains such as GameStop carried imported PAL versions of the game. It was eventually released for the original Xbox in 2002 with an English dub. Due to development costs and disappointing sales, Sega expressed no plans in producing any further games in the series, and as years passed by with no sign of a third entry going forward, many fans lost hope that a sequel would ever come into fruition.

However, at E3 2015, 14 years after Shenmue II's original release, a Kickstarter was announced to fund Shenmue III, which reached its goal of $2 million in nine hours and broke the record for the fastest project to break one million dollars in fundingnote One hour and forty-two minutes, as well as becoming the highest funded video game on the site at the time. Meanwhile, Sega announced in 2018 that the first two games would be packaged together on modern platforms in a Compilation Rerelease.