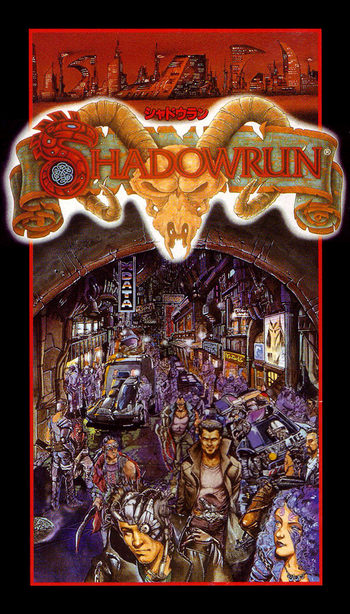 Shadowrun is a Tabletop Game created by FASA in 1989. Since then, it has been adapted into several different video games, each sharing the name Shadowrun.

for the Super Nintendo Entertainment System, was developed by Beam Software and released by Data East. It is loosely based on the tie-in novel Never Deal with a Dragon: Jake Armitage, a Seattle-based Runner, awakens one night in the city morgue with no memory of anything — save his name, conveniently written on the slab. Following an encounter with his animal spirit guide (a mutt, if you're wondering), Jake embarks on a quest to reclaim his identity and, more urgently, escape the long reach of his old employer. The game, obviously raunchy for the mid-90s, suffered from a Troubled Production and was a financial failure, but quickly became a Cult Classic.

A year later in 1994, another game was released under the Shadowrun

name for the Sega Genesis; this version was developed by Blue Sky Software. This game had a much more Wide-Open Sandbox type gameplay with more granular character customization and a less-linear story: A new hero, Joshua, is investigating the death of his brother during a botched run. To gather evidence, Joshua will have to get acquainted with Running and the various players in Seattle's underworld. Notably, this game inspired Greg Zeschuk and Ray Muzyka to leave the field of medicine to co-found BioWare; this version is also noteworthy for being extremely faithful to the tabletop game's mechanics.

In 1996 another game titled Shadowrun

was developed by Compile and released for the Sega Mega-CD system. It was never released outside of Japan, had a much more anime art style, and was loosely based on a manga which was in turn loosely based on Shadowrun.

was again made as an online only (or single player with AI players) first-person shooter Video Game, developed by FASA Interactive for the Xbox 360 and Windows (intended to work only with the then-new Vista operating system, though later easily cracked to work on Windows XP). The game features a buying system which is greatly inspired by the game Counter-Strike. It is not set in the official Shadowrun timeline, but an alternate continuity invented by FASA Interactive. The PC version was the first game to use Microsoft's Games for Windows - Live Digital Rights Management system, and it was also the second game on the 360 to allow cross-play between it and PC (after the 360's 2006 port of Final Fantasy XI) as part of a heavily-advertised but very short-lived attempt to make cross-play between 360 and PC games standard.

declared their intention to make a Shadowrun game

on Kickstarter - and exceeded its $400,000 goal in just 28 hours, making $1,889,416 total over the course of the next month. The resulting game, Shadowrun Returns, was released July 25, 2013. It now has two "expansions" (which are much more like full-blown sequels), Dragonfall and Hong Kong.

Another game came out in 2015, Shadowrun Chronicles: Boston Lockdown