Video Game / Shadow of the Beast 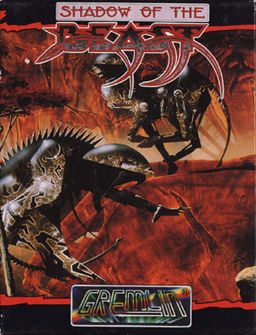 The cover of the first game
A trilogy of 2D Action-Adventure games with Metroidvania elements (albeit created before either of these terms were established), published by Psygnosis. All three games were originally developed by Reflections Interactive for the Amiga.
Advertisement:

The original is based around a child called Aarbron being kidnapped by servants of the Beast lord, Maletoth, and taken to his realm (the nature of the series' world at large is somewhat ambiguous), then brainwashed and corrupted into a Beast over the years by evil magic. One day, while watching some sacrifices, he recognizes one of the dying victims as his father, and with the sudden remembrance of his past (and the Beast transformation conveniently making him superhumanly strong), begins a Roaring Rampage of Revenge to kill Maletoth. The game was mainly noted for its stunning artwork and soundtrack (seemingly heavily inspired by Roger Dean, such that he designed the cover art for the game) and was one of the main Trope Codifiers for Scenery Porn in Video Games. It also had a combination of puzzles and combat that was somewhat novel at its time of release and it got positive reviews overall. However, the game was also undistilled Nintendo Hard and its puzzles were full of Trial-and-Error Gameplay and Unwinnable, which got it some major criticism as well.

Shadow of the Beast II continues from the first game. While Maletoth is still at large, Aarbron's actions in the first game have allowed him to regain some of his original human form (although he still remains a Half-Human Hybrid), while drinking from a pool of water he sees a vision brought on by Maletoth to taunt him, where he finds out his sister has been kidnapped and taken to the region of Kara-Moon. Aarbron ventures into unknown territory to rescue her... The sequel kept the visuals and soundtrack quality of the original game, and also attempted a more non-linear style of gameplay. It was just as Nintendo Hard (if not more so) and still had several Trial and Error Gameplay and Unwinnable moments (and in most cases required things to be done in a specific order, compromising the seemingly non-linear world); with the novelty of the original game's style fading a little it got a weaker reception overall.

In Shadow of the Beast III (released only for the Amiga), Aarbron sleeps after killing Zelek, Maletoth's right-hand man (his sister is not referenced again) and has a dream where a wizard called Rekann, freed by Zelek's death, tells Aarbron he must find four Macguffins to acquire the power to finally kill Maletoth. Waking up, Aarbron realises he has regained his human form. Soon after a plane lands seemingly of its own accord; Aarbron enters and the unmanned plane takes him toward the items he needs, and Maletoth... The visuals and soundtrack were again top-notch. The game had a more linear format to the pseudo Metroidvania design of the earlier games, with the player choosing between four different levels instead (along with a final ending level where Maletoth is fought). While there was still plenty of Trial and Error Gameplay and Unwinnable, the Nintendo Hard was heavily reduced thanks to three lives being provided, along with enhanced ranged abilities, making combat a lot easier; the luster had somewhat faded from the series for reviewers at this point, but it still saw a better reception among reviewers than the second game, and was noted for actually attempting to improve the formula.