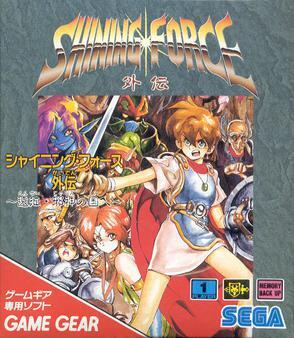 The Shining Force Gaiden games were released on the Sega Game Gear (the first one never made it out of Japan), but were later repackaged and enhanced for the Sega CD as Shining Force CD, today an exceedingly rare title. The story is a direct continuation of the first Shining Force game. Of those, the first one stars Prince Nick of Cypress, who has to help Anri (part of the original Guardiana Shining Force who ascended to become Queen) find a cure for her poisoning at the hands of a rogue wizard named Woldol. At first, the people of Guardiana are suspicious of him, but eventually he turns out to be a trustworthy and effective leader, thus gaining their respect.

The second Gaiden game (subtitle: The Sword of Hajya) stars Deanna of Cypress, a swordsman who is placed in charge of the Cypress branch of the Force while the Prince leads an invasion into Iom. However, with the Prince's right hand turned to stone, he is practically defenseless against the superior Iom forces, and can no longer use the Sword of Hajya that he used to defeat Woldol in the previous game, so he gets captured so he can be sacrificed to Iom. In that regard, Deanna and his team have to recover the Prince's lost sword, save the Prince, and help him bring down the Iom army once and for all.

The third Gaiden game, also never released outside of Japan, is entitled Final Conflict and ties the stories of the first two Genesis games together, as well as serving as a prequel to Shining Force II by showing how remnants of Max's team and the survivors of Dark Dragon's army came to Parmecia after his disappearance.