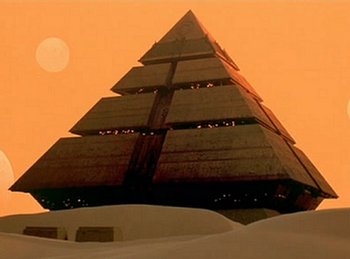 Pyramids. The distinct shape, clean vertices, and inherent coolness have fascinated humanity since the Egyptians. Some sci-fi writers like to stick modern or futuristic-looking pyramids into their works to combine old and new in a distinctive yet recognisable manner. The result is the future pyramid, a building in the style of ancient Egypt but using modern or yet-to-be-invented materials and construction methods. The primary reason for these is that they look impressive.

A pyramid is a good shape for a space-frame building, if you've got enough room for a wide building. But how many of the examples use that as justification?