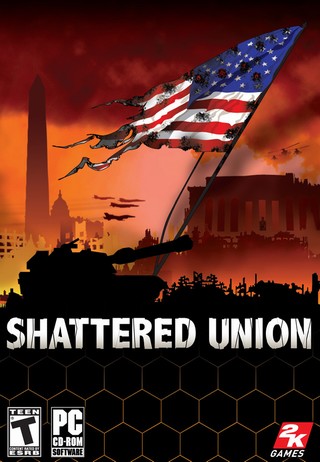 "A house divided against itself cannot stand." -Abraham Lincoln
Shattered Union is a turn-based strategy game on hex maps, released on PC and Xbox in 2005, on Steam 2006. The game is set in 2014. Six years prior to the beginning of the game, David Jefferson Adams is elected as America's 44th President, and a highly unpopular one at that, resulting in high levels of domestic unrest, terrorism, and armed resistance that leads to the instituting of martial law. After he gets himself a second term in a blatant sham election, domestic terrorists detonate a low-yield nuclear device over Washington, D.C. on Inauguration Day, killing most of the United States federal government and breaking the line of presidential succession. In the interest of maintaining trade relations, The European Union dispatches detachments of armed peacekeepers into the ruins of Washington to help rebuild the city, maintain order, and eventually reestablish the original government. They are less than popular with the locals.
Advertisement:

In fact, they are so unpopular that, soon after their arrival, California and Texas declare home rule and secede from the Union. Many other states soon follow; within months, the only states still pledging loyalty to the original government are the ones under European Union control. Sooner or later someone's nerves get the better of them and a shot is fired, and the Second American Civil War is officially underway, with every single faction fighting every single other faction for control of the nation. Meanwhile, Russia, under an ultranationalist government, invades and annexes Alaska, claiming that it was rightfully theirs to begin with.

Gameplay-wise, Shattered Union is divided into a strategic map in which you control higher-level decisions at the country level, and a tactical map in which you fight the actual battles, both turn based. Each faction gains money every turn based on the number of territories they control and the amount of resources in each territory. In each turn, factions can buy, scrap, or repair existing units and attack territories; when attacking or being attacked, the game zooms down to the tactical map level and combat occurs. Combat is stat-based, with each unit type having a number of effectiveness ratings against different other unit types, modified by things such as range, terrain, weather condition, etc. Each faction also has a number of special abilities that can be deployed in combat, some of them positively affecting friendly units and others negatively affecting hostile units; these abilities typically have a lengthy cooldown.

It is stated that a movie adaptation of the game will be made by Disney with Jerry Bruckheimer directing and written by J. Michael Straczynski.