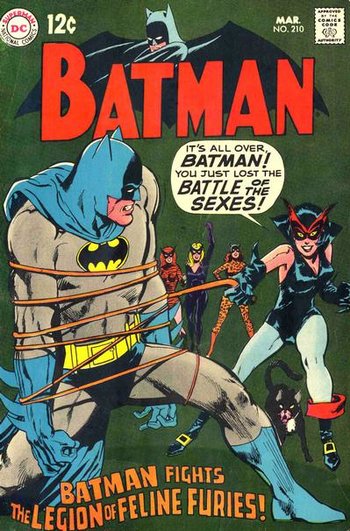 Batman's greatest weakness: tight leather jumpsuits and whips.
The ability of Action Heroes, swashbucklers and suchlike to make a rope, whip, chain or Grappling-Hook Pistol wrap itself around a distant object securely. Used to achieve a Building Swing or to instantly tie up an enemy. While this is certainly possible with luck (and, preferably, a weight or hook on the end), you wouldn't want to stake your life on it.
Advertisement:

Particularly notable when someone has a chain as a weapon. It's rare you'll see them actually beating anyone to a pulp with it, as happens in real life — they'll do this instead. Also, a character wielding a whip will usually tie up an enemy with this technique, rather than actually whipping anyone with it.

Often with this trope, the rope or whip that was just used to swing across a chasm will instantly and easily come undone once the hero is safely on the other side so he or she can retrieve it.

Essentially, this is using an ordinary object as if it were a Grappling-Hook Pistol. If wrapped around the object enough, this becomes Truth in Television.note This is due to Belt friction