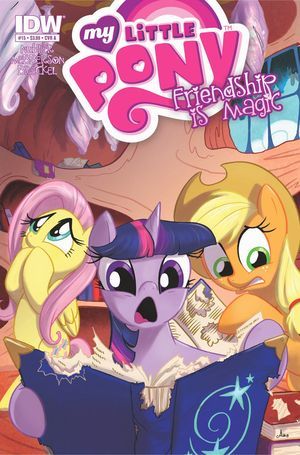 He hurt the books? He will pay!

Ponies in Book Land (a.k.a The Bookworm Arc)

Twilight discovers that a magical and uncatchable bookworm is eating through her books, while at the same time a number of strange pods have started appearing over Ponyville. Leaving AJ, Fluttershy, and Spike behind to watch the pods, Twilight, Rainbow, Pinkie, and Rarity use magic to enter the books in an attempt to repair the stories, believing that will stop the bookworm. Twilight warns her friends to keep the stories to their original form, but they cannot help but to embellish when each has a chance to be their favorite heroes across different works. Meanwhile, in Ponyville, AJ, Fluttershy, and Spike find one pod that bursts open to reveal Daring Do, and fear what other fictional characters may emerge from the others.

In one story, they attempt to thwart the bookworm, who wants to make the stories for itself. The bookworm manages to escape, and the fictional world the ponies are in begins to erase completely. The four manage to make their way through the bookworm's exit portal, only to find themselves in a void of complete white, and Twilight realizes the bookworm has managed to eat all of her books. In Ponyville, all the other pods have opened to reveal characters from the stories — some with more malicious intent than others — planning to take over this new world.

As AJ, Fluttershy, and Spike try to keep Ponyville under control, the other four argue, until realization dawns on Twilight that they can create their own stories from this void, hoping to lure the bookworm towards them with fresh fiction to eat. Between Pinkie's, Rainbow's, and Rarity's imaginations, they are able to locate the sleeping bookworm and provide a tale that wakes him, and the four race to avoid being eaten. The more evil creatures that have appeared in Ponyville have captured the others, but AJ and Fluttershy get the idea of drawing a simple comic story that will be consumed by the bookworm to explain their plight to Twilight and the others. Their plan works, and Twilight tries to reason with the bookworm, showing that his consumption of stories is threatening their friends. The bookworm explains that his actions were only meant to let him read the stories in the books, and meant no harm to anyone. The bookworm agrees to help with his exacting memory of the original stories, and Twilight reverses the spell that brought them into the books. The bookworm then begins to recall all the stories it consumed, repairing each book one by one and causing the fictional characters to disappear. With the library restored to normal, the bookworm thanks the ponies for their stories and returns back to a book safely.