Before the Dark Times 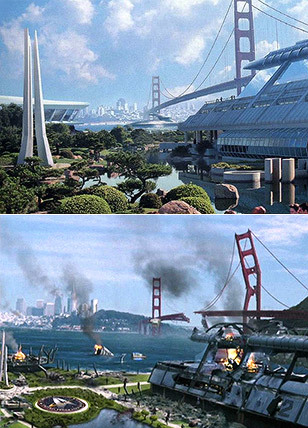 Starfleet Headquarters.
Top: Pre-Dominion War.
Bottom: Post-Dominion War.
"For over a thousand generations, the Jedi Knights were the guardians of peace and justice in the Old Republic. Before the Dark Times. Before the Empire."
— Obi-Wan Kenobi, A New Hope
Advertisement:

Before the world fell into a dystopia, or worse, an apocalyptic ruin, it lived in a time of power and wealth. Depending on the cynicism of the series, either this happier time was just that, a happier time, or on the other end, a Crapsaccharine World.

In some works, restoring the world to this once grand state may be the goal of the characters. Conflict may arise when there are different factions each with their own ideas on how to recreate this utopia. In cynical works, older characters who lived in this time, or characters educated about this time may also comment on how it really wasn't that grand a time, and that in reality, it was just as bad, but in its own ways. In other works, there may be no way to restore the world to its once-grand state, and the details of it only exist to highlight how far the work's society has fallen, and to add drama to the story.

If there were any characters that were Human Popsicles, from this old time that wake up in the time of the work, or find themselves there due to some sort of time travel, expect to see a Fish out of Temporal Water story from them, along with plenty of angst.

What separates this trope from From Cataclysm to Myth is that this "better" time is still well remembered, and not relegated to myths and legends.

Related to End of an Age. The Dark Times may be related to this trope, but not always. Not to be confused with Just Before the End. When a work is set here, you may be looking at a Prequel in the Lost Age.