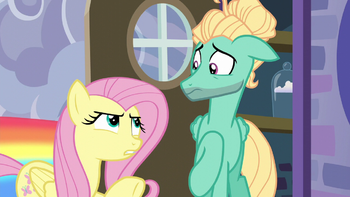 GET A JOB
Fluttershy: Remember how we talked about you getting a job?
Zephyr Breeze: It was just yesterday, and it's totally on my to-do list, but you can't expect to find something befitting my awesomeness overnight.
Story by Meghan McCarthy
Written by Dave Rapp
Advertisement:

While having lunch with her parents and Rainbow Dash, Fluttershy's father brings up her younger brother, Zephyr Breeze, who is a notorious slacker with visions of being artistic. Mr. and Mrs. Shy, however, have already agreed to let Zephyr stay with them while he's between jobs, having dropped out of mane therapy school recently. Zephyr, despite his lack of success, is boastful, brash and rude to his family, moving things around his parents' house, even ruining his family's furniture and cherished possessions. Fluttershy tells her parents that they should make him stay somewhere else, and they insist they'll be assertive, but they continue to enable his behavior by being pushovers. After leaving, Fluttershy confides in Pinkie Pie and Applejack about her frustrations, to which Applejack says that if her parents won't be assertive, she'll have to be assertive for them. Fluttershy agrees, and returns to her parents' home to kick Zephyr out, her assertiveness enabling their parents to agree. Though heartbroken, Zephyr agrees to leave, saying he has somewhere else to go, only to show up shortly thereafter at Fluttershy's house to crash with her.

Fluttershy agrees to let Zephyr stay with her on the condition that he gets a job. To this end, she signs Zephyr to dye fabric with Rarity, but he tries to get Rarity's cat and the local wildlife to do it, and he's fired. Twilight offers to let him clean her windows for work, but Zephyr tricks Spike into doing all the work. Finally, Rainbow Dash demands Zephyr work for the Wonderbolts, but when he still can't complete his tasks, she fries him with a lightning bolt. Zephyr wants to continue to stay with his sister, but since he still hasn't found a job like he agreed, Fluttershy forbids him from staying any longer. Zephyr leaves to go live in the woods, with Fluttershy upset at the situation.

Fluttershy confides in Rainbow that she still doesn't want Zephyr to be upset, despite his failings, and the two go to find him in the woods. Zephyr is not much use on his own, failing to start a fire or set up a camp. Fluttershy and Rainbow find Zephyr, when he admits that he's so scared of failing that he doesn't put effort into anything he does, even admitting that Fluttershy and Rainbow are far better than him, being multi-time saviors of Equestria. Fluttershy responds that they were always scared they would fail, but gave it a try anyway. They convince Zephyr to return to Fluttershy's house on the condition that he do exactly what his sister tells him. It turns out to be giving his all into correcting the mane style on his training dummy. While reluctant and resistant at first, Zephyr finally does put in his full effort, and the mane comes out looking fantastic. Finally seeing what he's capable of, Zephyr goes on to finally graduate from mane styling school, his future finally looking bright thanks to Fluttershy's help.