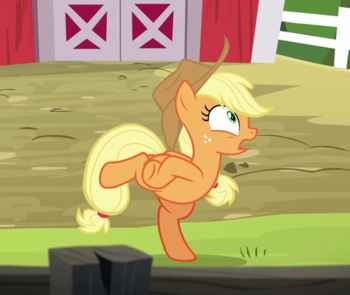 Congrats Scootaloo, there's a new chicken pony in town.
"I guess it's possible to get stuck in a routine where you're doin' all this extra stuff and not realize it, but I can't for the life of me think of how!... Why are y'all staring at me like that?"
— Applejack
Story by Neal Dusedau, Michael P. Fox, & Wil Fox
Written by Michael P. Fox & Wil Fox
Advertisement:

Rarity is looking forward to spending a day with Applejack at the Ponyville Spa, but Applejack's chores prevent her from arriving until just before the spa closes for the day. Frustrated, Rarity confides in Twilight that Applejack's chores are preventing them from spending any time together for their weekly spa treatments. Twilight, Rarity and Spike head to Sweet Apple Acres, where Applejack is baking pies among her usual chores. She wants to go to the spa with Rarity, but says that her chores come first, and she has so many of them to do. Twilight and Spike offer to take over Applejack's chore of feeding the farm's pigs to free up an hour of time for Applejack and Rarity to enjoy a steam bath at the spa. Applejack agrees, with her and Rarity heading off to the spa.

At the spa, Applejack and Rarity want to head into the steam room, but are confronted by a very long line of ponies in front of them, waiting to use it. While waiting, several of the spa guests use hot towels to keep warm instead, running the spa's washers and dryers on full blast around the clock. Rarity offers to do something else at the spa, but Applejack is insistent on getting into the steam room before anything else. Applejack discovers that one of the valves has sprung a small leak, leading to slower steam buildup, which in turn results in more hot towels being used by the customers. Despite Rarity's pleas for time, Applejack fixes the leaking steam valve herself. Applejack says that the spa was creating its own problem, since the employees had gotten so used to their workaround solution that they never bothered to fix the original leak. While this solves the long wait time for the steam room, it uses up the remainder of the hour that she and Rarity had for it, forcing them to go back to Sweet Apple Acres.

At the farm, Twilight and Spike haven't even properly gotten started feeding the pigs, thanks to following Applejack's list to the letter. When Applejack returns, she starts a bizarre set of activities to feed the pigs, most of which are ultimately unnecessary since they were intended to get around problems that have long since been solved. Rarity says that Applejack herself is guilty of the problem she noted at the spa: developing routines to compensate for problems instead of solving them. Rarity and Twilight help streamline Applejack's chores by going over them with her, and figuring out ways to get more of them done faster and more efficiently. With all of the time remaining after the chores are done, Applejack and Rarity head back to the spa to finally relax.