Recap / My Little Pony: Friendship Is Magic S6 E13 "Spice Up Your Life" 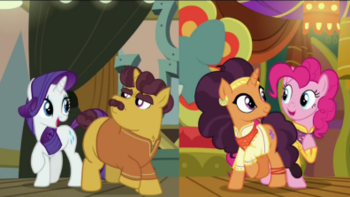 Spreading Friendship, Bollywood-Style!
"It takes a true culinary artist to create a subtle taste: the barest hint of a sensation. That's what I bring to Canterlot. That's art!"
—Zesty Gourmand
Written by Michael Vogel
Advertisement:

Twilight Sparkle and Starlight Glimmer, realizing that the crystal map in the castle hasn't worked since Starlight used it to travel through time, use a spell to get it working again. The map glows and reactivates, sending Rarity and Pinkie Pie to Canterlot to solve a friendship problem. Rarity, once there, says that they need to look for a friendship problem in culture, couture, or cuisine. Pinkie's stomach growls, so they go to Restaurant Row to find lunch.

While on Restaurant Row, Rarity looks for restaurants that specifically have a three-hoof rating from Zesty Gourmand, a noted food critic whose opinion carries a lot of weight. However, Pinkie finds all of the three-hoof rated restaurants to have bland food in small portions, in addition to looking very similar to one another. The two finally stumble upon a restaurant that is not rated called the Tasty Treat, staffed by Saffron Masala and her father Coriander Cumin. While Saffron is ecstatic to have guests, Coriander is expecting things to fail. When Rarity and Pinkie try the food, they instantly take a liking to it. The father and daughter argue quite a bit over the fact that their restaurant hasn't been rated by Zesty Gourmand, giving Rarity an idea to prepare the restaurant for the critic's approval. Rarity does manage to get Zesty to agree to show up, but only that evening. Pinkie Pie leaves with Saffron to attract ponies to the restaurant by telling her to be true to herself, while Rarity stays behind with Coriander to make it look similar to every other restaurant on Restaurant Row.

Though Pinkie's success is limited, attracting only two ponies from Whinnyapolis, they were expecting the Tasty Treat to look different from every other restaurant. When they arrive, they find that Rarity has crafted the Tasty Treat into another fancy, small-portion restaurant to get Zesty Gourmand's approval. Both Zesty Gourmand and the two tourist ponies arrive, but a scuffle between Rarity and Pinkie leaves all three doused in their food instead of eating it. Zesty leaves in a huff, saying that Rarity knows only about clothes and nothing else, so her opinion carries no weight. Rarity and Pinkie Pie apologize for messing things up as Saffron brings everyone bowls of noodle soup. This prompts Coriander to remember the good times he and Saffron used to have while cooking together, reinvigorating his drive. Rarity then realizes that she and Pinkie were doing the wrong jobs; Rarity uses her knowledge of Canterlot's elite life to attract ponies to the Tasty Treat while Pinkie puts the decor back as it was. Zesty Gourmand shows back up, shocked to find the restaurant now packed with happy customers, and cannot believe that they would eat there even though it has no rating. Rarity counters that while Zesty is entitled to her opinion, it's not going to cover every restaurant, and that her tastes shouldn't define how every restaurant acts, causing Zesty once more to leave in a huff. Saffron and Coriander thank Rarity and Pinkie for bringing them together again, causing their cutie marks to glow, indicating that they solved the problem.