Recap / My Little Pony: Friendship Is Magic S5 E23 "The Hooffields and McColts" 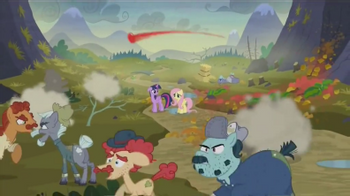 A hootenanny, this ain't.
"If you ain't fer us, yer agin' us."
— Big Daddy McColt
Written by Joanna Lewis and Kristine Songco
Advertisement:

While getting ready to start a book club meeting with her animal friends, Fluttershy's cutie mark glows, indicating the map in Twilight's castle is summoning her. Fluttershy arrives, only to find a very eager Twilight Sparkle already waiting. The map has summoned the two of them to a valley in Equestria called the Smokey Mountains which is known for its beauty, with a river running between two mountainous hills. Twilight, along with a "friendship portfolio," travels with Fluttershy to the valley.

When the two friends arrive at Smokey Mountains, they're suddenly set upon by pumpkins being launched from one of the peaks. Upon investigating, they find a family of earth ponies called the Hooffields launching food at the other peak, which holds a family called the McColts. The Hooffields are expert farmers, while the McColts are expert builders, and the two families are engaged in a bitter feud. Twilight and Fluttershy attempt to get to the root of the problem, but are constantly stymied. At first, the families simply dismiss their attempts, but further investigation reveals that neither family really knows what started the feud, or why they keep going. However, neither family is willing to back down.

Finally, Twilight seems to have convinced Ma Hooffield to make peace by baking a large cake, bringing it to the McColts. But the Hooffields hid inside of the cake, and emerge once it's inside the McColt fort. This triggers a massive brawl between the two families, with Twilight all but giving up on solving the problem. While Twilight sulks away from the fighting, Fluttershy sees several hungry, cold animals in the area, who tell her all about how the feud really started.

Twilight uses a spell to freeze all of the Hooffields and McColts in place while Fluttershy explains: the feud started when their ancestors Grub Hooffield and Piles McColt wanted to preserve the valley and protect the animals, but couldn't agree on how to do it. Grub wanted to start growing crops for the animals to eat, whereas Piles wanted to build a shelter for the animals to live. Since both of them were insistent on doing things their own way, and neither one was willing to back down, they eventually began sabotaging each others efforts. Their arguing turned into a full-blown feud with each other that eclipsed their original goal to preserve the valley, a feud that their descendants are now pointlessly continuing. The Hooffields and McColts finally see that they've been fighting over nothing and, after realizing how their fighting has hurt both the land and the animals, they call a truce. As the two families come together to start farming and building, Twilight and Fluttershy's cutie marks glow, indicating they solved the problem. They begin heading back to Ponyville, with Twilight wondering out loud that, now that the map has summoned all of the Mane Six, where they'll be sent next.