Recap / My Little Pony: Friendship Is Magic S5 E17 "Made in Manehattan" 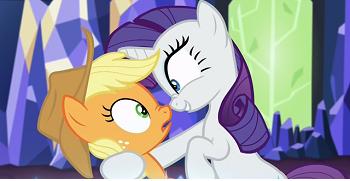 Are you pondering what I'm pondering, Applejack?
Applejack: I'm suggestin' we stop worryin' about what we can't do, and start doing what we can! I think I've got a plan. It won't be anythin' big or fancy, but it'll be somethin'. And somethin's gotta be better than nothin', right?
Written by Noelle Benvenuti
Advertisement:

The Friendship Map summons Rarity and Applejack to Manehattan. Rarity is overjoyed to be going back to the big city again, but Applejack is mystified and a little unhappy to be dragged out of her element. When they arrive, Applejack has difficulty adjusting to the rude and hurried behavior of the Manehattan ponies, and while Rarity makes herself at home buying random ponies hats and helping them with fashion, she has no idea what friendship problem the two of them must solve.

As they cast about for ponies with friendship issues, Rarity finds a flyer advertising the Midsummer Theater Revival, headed by none other than Coco Pommel. Rarity and Applejack meet with Coco, who tells the two of them that the program was formerly headed by a generous pony named Charity Kindheart, who used to organize a yearly event with plays, refreshments, and a sense of friendship to unite the community. But that all ended when Charity moved away, and while Coco wants to step into Charity's horseshoes, there's far too much work for her to do it alone. Rarity and Applejack eagerly volunteer to help Coco, but they can't seem to find anypony else willing to assist. Rarity works on costumes while Applejack tries to clean up a local park, a job that proves far too big for her to handle alone.

Coco laments her failure, while Rarity and Applejack openly wonder why the map didn't simply call Twilight to Manehattan with them, since her magic could have fixed everything with ease. Applejack consoles Coco with advice: do what you can and don't worry about the rest. Using costumes designed by Rarity and Coco and a simple set and stage built by Applejack, the actors Coco has invited put on a play for anyone who happens to be passing by. More ponies stop to watch as the show goes on, eventually gathering a large crowd and accomplishing the Midsummer Theater Revival's main goal — bringing the community together and engendering a spirit of friendship.

After the play is over, two ponies confide in Rarity and Applejack that they now understand how much difference even a little effort can make. Rarity comes to realize that Twilight was not summoned precisely because her magic would simply zap the problem away, which would mean the Manehattan ponies would never have seen the value of small efforts. The moment of insight causes Rarity and Applejack's cutie marks to glow, meaning they've solved their friendship problem. Applejack is eager to head home, but Rarity can't resist stopping one more "crime against fashion" on their way back.