Recap / My Little Pony: Friendship Is Magic S7 E21 "Once Upon a Zeppelin" 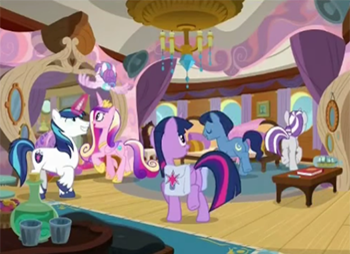 Twilight is stuck in a mountain of paperwork when Spike burps up a letter from her parents, Night Light and Twilight Velvet, saying that they won a airship cruise and have invited Twilight along. Though Twilight is hesitant to take a vacation, Spike insists she go and offers to take over the paperwork for her.

As the cruise boards at Canterlot, Twilight joins her parents as well as Princess Cadance, Shining Armor, and Flurry Heart. Twilight being Twilight, she has arranged a schedule for all of them to do the things they enjoy and spend time as a family, in particular, seeing the rare occurrence of the Northern Star passage after sunset. However, the cruise pilot insists by the speaker system them come out to deck with the other passengers. As they pass famous landmarks, the cruise pilot rattles on how these attractions are tied to Twilight and her family, even when they are fabrications. She and Cadance notice for the first time that nearly all of the other ponies on the cruise are wearing Twilight or Cadance-related fan gear, and are watching Twilight's family closely. She goes to see the cruise pilot, and discovers this is all a plan of Iron Will, who arranged for Twilight's parents to win the trip so that he could sell tickets for a "Cruise of the Princesses" to adoring fans of Twilight and Cadance.

Twilight and her family accost Iron Will, learning he wants them to be part of the day's activities for the passengers. However, Twilight insists that the rest of her family be allowed to do what they want to do, if she takes on what Iron Will wants for her. Iron Will accepts and drags her off for the first event, a raffle drawing for a pony to become an honorary member of Twilight's family for the day. The winner is Star Tracker, a eager but shy stallion who frequently gets in Twilight's personal space.

Over the day, Twilight tries to get involved with the events her family is enjoying, but Iron Will directs her to her other "duties", and she misses out on some of the events she really wanted to be a part of. As the day wanes, Iron Will gives her one more event, an autograph signing line. This takes seemingly forever, and when Star Tracker, the last one in line, comes up to her, she sees that sunset has passed. She races to the bow of the ship, too late as the Northern Star passes, and breaks out in tears. Star Tracker tries to apologize, but she chews him out for his behavior all day, and further yells at her family, since they all had the time they wanted but she didn't. She storms off.

Later, Cadance finds Twilight alone, and tells her that while she is a princess, and has her duties, she also needs to spend her own time with the things that matter most to her, as Cadance had to do when Flurry Heart was born. Taking Cadance's advice, Twilight returns to her family and Star Tracker, and apologizes, saying she should have been more vocal about her disappointment at missing the events. She then takes them all to get ice cream, something completely off the schedule. As they are enjoying it, Iron Will comes over to try to make a spectacle for the rest of the guests of ice cream, but Star Tracker steps up and tells him to leave Twilight alone. Iron Will refuses, but Twilight takes charge, and tells the guests they know they wanted to be with the princesses on this trip, and had this all day, but she needs to spend the rest of the trip with her family. The guests agree to give Twilight privacy but asks why the cruise was advertised as a princess theme if she wanted a break. All eyes fall on Iron Will who admits the fine print states there is no guarantee of an "actual princess" performing the activities. The guests, enraged, start shouting at Iron Will for their money back, but the minotaur asserts he learned his lesson from last time, and had a "no refunds" clause in the fine print, before jumping overboard with a parachute.

The cruise continues as it returns to Canterlot. Twilight finds that her family had made makeshift Northern Star costumes to help try to cheer her up, and she is happy to spend the time with them.