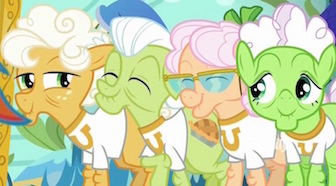 The Golden Girls: Pony Edition.
I love me some nachos. I'mma set my dentures loose on these vittles until the crumbs cry uncle!
— Granny Smith
Written by Gilliam M. Berrow
Advertisement:

Rainbow Dash learns from the Wonderbolts that the Wild Blue Yonder roller-coaster in Las Pegasus is soon to close down forever, and that all of the other Wonderbolts have ridden it. Rainbow doesn't want to miss the chance and excitedly tells everypony else she meets, but she's reminded by Applejack that she's scheduled to teach at the School of Friendship. Applejack offers to substitute for her if she takes Big Macintosh's place to chaperone the "Gold Horseshoe Gals" — elderly Granny Smith, Apple Rose, Auntie Applesauce, and Goldie Delicious (and Goldie's numerous cats) — during their annual trip to Las Pegasus. Rainbow reluctantly agrees.

As the older mares are preparing to travel by balloon, AJ urges Rainbow to keep an eye on them and avoid any activities that might be too exciting for them; otherwise they may have to leave Las Pegasus early, and Rainbow won't get her chance to ride the coaster. They soon leave, though Rainbow struggles with how slow the mares move against her own eagerness to get there. Once they arrive, the older mares want to go start having fun, but Rainbow convinces them they should check into their hotel and take a nap, which would give her time to sneak out and ride the coaster. Granny and the others feign agreement and head off to bed. Rainbow takes off but finds the line on the coaster is too long, but when she returns to the hotel room, the four mares have disappeared.

Rainbow rushes around the hotel and finally finds them, watching Goldie Delicious expertly tossing horseshoes in an arcade game. Rainbow, haunted by AJ's advice to her, thinks this is too exciting and interrupts the game, making Goldie lose. Granny suggests next they go to a buffet, but while they try to take some of the more exotic choices, Rainbow, again on AJ's caution, makes them all stick to soup. They then head to a dance club, where the mares see the magicians Big Bucks and Jack Pot, and use their charm to get five tickets to their show that night. At the magic show, Big Bucks and Jack Pot select the four mares for a trick, helping them to escape a flooded water cage. Rainbow thinks the mares are in danger and interrupts the trick to save them. Granny and the others give Rainbow a firm reprimand, telling them that they have been coming to Las Pegasus for years, and had seen this trick before and knew they would be safe. They had thought that Rainbow had been limiting their fun on purpose, even though they thought she would be a hoot to be around. Rainbow admits that she only wanted to ride the coaster, but had been following what AJ told her to do; the mares laugh that off, knowing that AJ was being overly protective of them. Since they know Rainbow wants to go on the coaster, but the line's otherwise too long, they show her a perk of their frequent stays at the hotel, as they are able to cut through the lines to the front as honored guests, and Rainbow and the others enjoy the ride before its permanent closure.

On the way back to Ponyville, Rainbow realizes the four mares are a lot more fun than it seems, and Granny and the others think that Rainbow, no longer beholden to AJ's rules, was also fun to be with as well, and make her a member of the Gold Horseshoe Gals and join them on their next trip to Las Pegasus, which Rainbow accepts.