Recap / My Little Pony: Friendship Is Magic S8 E4 "Fake It 'Til You Make It" 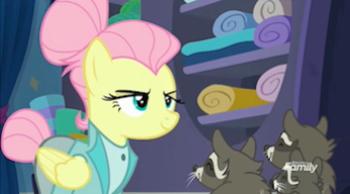 After calling in the staff from all her boutiques to help with a major fashion show in Canterlot, Rarity realizes that nopony will be left to run her Manehattan store at the height of shopping season. She asks everypony else in Ponyville with no success, then enlists the help of a reluctant Fluttershy as a last resort.

As her assistants prepare for the trip to Canterlot, Rarity shows Fluttershy the ropes and assures her that the raccoons, Smokey, Softpad, and Smokey Jr., are ready to help. Fluttershy's first customer seems overly-demanding but Rarity steps in and with a bit of shrewdness, suggests the exact outfit the customer wants. Fluttershy still feels she cannot do that, and Rarity suggest that maybe if she don an outfit, it might help her be more confident in handling customers. Rarity then leaves to catch the train to Canterlot.

Fluttershy's first customer alone is initially difficult, but with encouragement of the raccoons, she is able to create a snooty persona for the outfit Rarity gave her, impressing him and securing the sale. Rarity has momentary second thoughts about leaving Fluttershy alone, but runs into this customer on the way back to the store, who raves about the service at Rarity's shop. Assured that Fluttershy has the store handled, Rarity goes back to the train.

As more customers come to the store, Fluttershy finds that her one persona is not sufficient for some of the customers, but with suggestions of the raccoons, she takes on another outfit and creates another persona, one more Valley Girl, that works for the sale. She's forced yet into a third Goth-style persona for other customers. Fluttershy quickly is able to shift in and out of these personas, but starts to lose herself in the role, treating both the customers and the raccoons with resentment when they don't take her suggestions. The raccoons know something is wrong and make it to Ponyville to warn Twilight Sparkle and the others. When they get back to the store in Manehattan, they cannot convince Fluttershy to drop the act, and she kicks them out of the store.

Twilight and the others go to Canterlot and convince Rarity to leave the fashion show and come help the store. There, Rarity is able to convince Fluttershy she has been too forceful, firing each of her personas one by one, and Fluttershy reverts to her normal self. Rarity is pleased that Fluttershy was about to harness her inner strength to create her personas, and gets an idea for a new outfit based on this inner strength that Fluttershy proudly shows off to her friends.