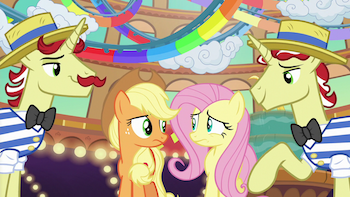 The Cutie Map has called Applejack and Fluttershy to Las Pegasus, where the pair have to find a friendship problem to solve. They enter a five-star hotel run by a generous pony named Gladmane, who appears to make friends with just about everypony he comes across. Recognizing Applejack and Fluttershy as friends of Princess Twilight Sparkle, he takes them on a tour of his hotel. The ponies they come across at the hotel's theater all speak very highly of Gladmane, showing off their new tricks and acts. At first, it seems as if Fluttershy and Applejack are going to have a hard time finding a friendship problem, until the duo run across the con artists Flim and Flam, who are practically at each other's throats with arguments.

Applejack, remembering her history with the brothers, outright refuses to help them. Fluttershy takes it upon herself to ask the brothers why they're fighting, while Applejack searches for a friendship problem herself, going backstage at the theater. In both cases, pairs of ponies insist that Gladmane has told them how much of a friend he is to them, while also spreading scurrilous rumors about their partner. Putting their heads together, Applejack and Fluttershy deduce that Gladmane must be intentionally making the artists argue, since he's the only one who benefits from it. Fluttershy convinces Applejack to ask the Flim-Flam brothers about Gladmane, where they reveal that Gladmane has made them think the other brother said something they didn't actually say. Realizing that they've been conned, Flim and Flam agree to form a plan to help take down Gladmane.

Flim and Flam disguise Fluttershy as a pony named Impossibly Rich who has come to Las Pegasus, and Gladmane's hotel specifically, to raid it for talent for her own enterprise. Gladmane calls Flam up to his office, where he's talked into helping Gladmane's plan to take over every hotel in Las Pegasus. On the stage, Flam asks Gladmane his secret, with Flim hanging a microphone over his head. Gladmane says that the secret to his success... is friendship. He then reveals that he knew that Fluttershy was in disguise all along, and that they shouldn't have tried to "con a con man."

Later, Applejack and Fluttershy confront Gladmane in his office, where they ask him about his plan to take over Las Pegasus. He then reveals that he doesn't really care about any of the ponies in his show, and confesses that it's all to get more money and power, but that they have no way of proving it. However, during his confessional gloating, Fluttershy was holding down the button on Gladmane's intercom, broadcasting his speech to the hotel. Despite his pleas, his guests and talents all turn on Gladmane in an instant. Flim and Flam promptly take over the operation of the hotel as they start removing all trace of Gladmane from it. Applejack and Fluttershy realize they were sent because Applejack's distrust of the Flim-Flam Brothers let her uncover the bigger plot and Fluttershy's kindness helped them get the brothers' aid in exposing Gladmane. Fluttershy hopes that the Flim-Flam brothers felt good about using their talents to be helpful, but the brothers insist it was a "one-time deal," then going right on to con the ponies in the hotel out of more money from the stage shows, much to Applejack's annoyance.

Applejack and Fluttershy trick Gladmane into exposing his true colors, ruining his business once and for all.

Applejack and Fluttershy trick Gladmane into exposing his true colors, ruining his business once and for all.