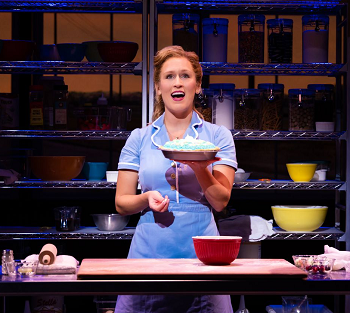 We all like at least some foods. We like to taste them, smell them, and to a lesser extent, look at them. But some characters like their food so much, they sing about it, and that's this trope.

This is generally to show that the person really loves that particular food (maybe it's even their Trademark Favorite Food) or food in general, sometimes to the point of obsession. They may also be a Large Ham, but that's not a necessity. It could also be because they're really hungry for whatever reason. If the singer is singing while cooking (which can overlap with Job Song if they're a professional chef, waiter, waitress, food seller, etc), it could be a song about the joys of cooking.

Often Played for Laughs because Food Songs Are Funny, but when Played for Drama, it might be sung by a villain who wants to eat the protagonist or similar.

An old-fashioned hoedown about the small town's love for corn pudding. Melissa's into it; Josh isn't.

A Toast For Today

I Love My Food

An old-fashioned hoedown about the small town's love for corn pudding. Melissa's into it; Josh isn't.

A Toast For Today

I Love My Food