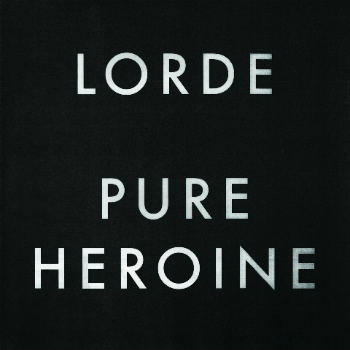 Don't you think that it's boring how people talk?
Advertisement:

Pure Heroine is the debut studio album by Lorde. Released on September 27, 2013, the album received critical acclaim for its production values, lyrical content that deviated from most modern pop acts, and thoughtful blend of musical styles, all while still keeping mainstream appeal. Pure Heroine was a Sleeper Hit. While it never topped the Billboard 200 (peaking at #3), it stayed in the Top 10 for a long time and went 2x Platinum (an extremely rare feat for any artist nowadays, let alone for an artist's debut album). This was partially due to the success of her mega hit "Royals", but also the fact that Album Filler was averted, with each song being unique and artistic, allowing the music to speak for itself. The fact that her songs are constantly featured in commercial advertisements and video games certainly doesn't hurt sales, either. Since then, Pure Heroine has sold over three million albums worldwide. Additionally, Lorde has won nearly thirty awards, including the Grammy award for "Song of the Year" with "Royals".

Not bad for a teenage girl from New Zealand.

The Extended Version adds all the songs from The Love Club. Please visit that page for trope pertaining to those songs.