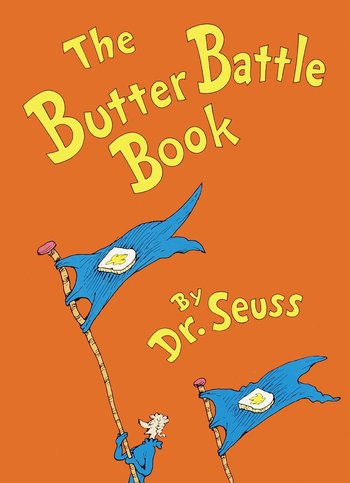 Which side is your butter on?

The Butter Battle Book is a children's book by Dr. Seuss and undoubtedly his darkest.

Written during (and intended to reflect directly on) the Cold War, it tells the story of an arms race between the Yooks and the Zooks, whose villages are divided by a wall all because they can't agree on which side of their bread to butter, leading up to what is all but stated to be a Mutually Assured Destruction.

Ralph Bakshi gave the book an Animated Adaptation in 1989, the last to be produced during Dr. Seuss' lifetime. Seuss regarded it as the best adaptation of any of his works.

Both book and animated special provides examples of: