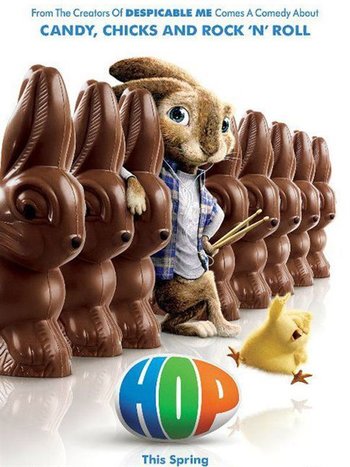 Hop is a 2011 Universal live-action/CG film focusing on the exploits of E.B. (Russell Brand), a young rabbit who is next in line to become the world-famous Easter Bunny of legend. His father (Hugh Laurie) can't wait to provide him with the title, but E.B. tends to sway more to the young, hip side of the Bunny family tree and doesn't want to follow in his father's footsteps, instead wanting to make it big in the world of rock.

He leaves for Hollywood in order to realize his dream and happens upon Fred (James Marsden), a kindred slacker who is house-sitting a mansion. After being nearly run over by Fred's car, he reluctantly takes in E.B., who wastes no time in causing him as much grief as possible. Soon however, Fred and E.B. learn that they have to contend with Carlos (Hank Azaria), one of the Easter Bunny chick assistants who decides that it's time for them to take over the holiday due to their doing all the work.