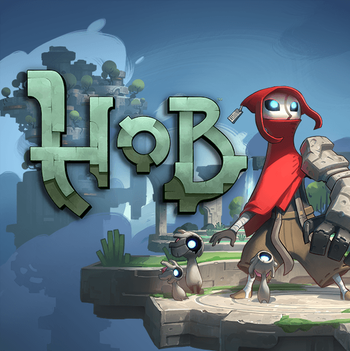 Hob is an Action-Adventure game with Metroidvania progression, developed by Runic Games (the creators of Torchlight and Torchlight II) and released on September 26th, 2017 on PC and Playstation 4. 2019 saw Hob: Definitive Edition, which was ported to Nintendo Switch as well.
Advertisement:

It can be thought of as a 3D platformer version of Hyper Light Drifter, as both games use a similar mix of combat, puzzles and exploration, and adopt the same approach to storytelling: there's literally no dialogue or story text anywhere in the game, so observing the colorful environment and the actions of the characters is pretty much the only way to learn what's going on.