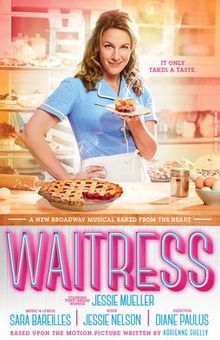 Waitress is a musical with music and lyrics written by Sara Bareilles and a book by Jessie Nelson, based on the Adrienne Shelly film. Originally premiering at the American Repertory Theater in Cambridge, Massachusetts in August 2015, Waitress made the move to Broadway in April 2016, premiering at the Brooks Atkinson Theatre.

The musical tells the story of Broken Bird Jenna Hunterson, a waitress with an incredible flair for baking pies stuck in an abusive marriage. Things only get worse for Jenna when an unwanted pregnancy comes out of the marriage but she soon finds solace in her gynaecologist, Dr. Pomatter.

The musical received a limited revival in Fall 2021, with Sara Bareilles as Jenna for the first couple of months.