Theatre / We Are The Tigers 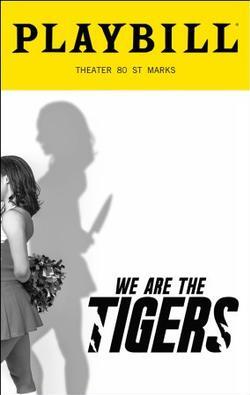 The playbill
We Are the Tigers is a pop rock murder mystery musical. The show follows cheer captain Riley Williams and the rest of her cheerleading squad at their annual cheerleading sleepover. Riley is determined to bring her team to victory at regionals, until a serial killer starts picking off team members one by one.
Advertisement:

The show premiered in Los Angeles in 2015, and ran Off-Broadway from February 2019 to April 2019. The shows website can be found

We Are the Tigers contains examples of: