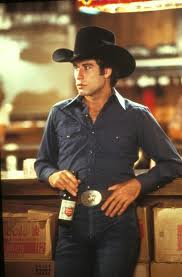 Bud Davis is a country boy moving to the city, visiting his uncle where he takes a job at refinery where his uncle works. Bud soon meets cowgirl Sissy (Debra Winger) and they fall in love, suddenly getting married. However, their marriage is shattered when Bud sees Sissy allegedly seeing con man Wes (Scott Glenn), who teaches her how to ride the mechanical bull and plans to rob Gilly’s. When a bull-riding contest is announced, Bud decides to sign up. Can he win the contest and save his marriage to Sissy?

The film receiving positive reviews from critics, earning a 73% "fresh" rating on Rotten Tomatoes and grossing almost $47 million in the United States alone, recovering Travolta from the 1978 flop Moment By Moment.