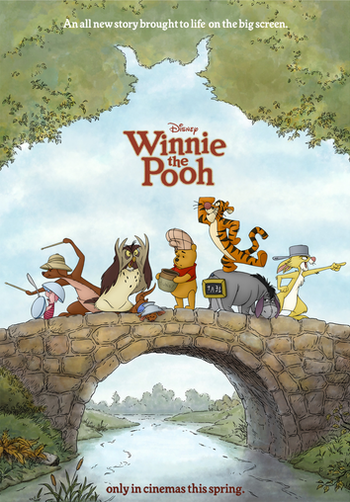 Pooh: Ever have one of those days where you just can't win, Eeyore?
Eeyore: Yup. I know how you feel.
Advertisement:

Winnie the Pooh is the 51st film in the Disney Animated Canon.note Except in the United Kingdom where it's excluded altogether, going straight to Wreck-It Ralph It is a direct sequel to the 1977 film The Many Adventures of Winnie the Pooh, based on three previously unadapted Pooh stories from the book ("In Which Eeyore Loses a Tail and Pooh Finds One" and a fusion of "In Which Rabbit Has a Busy Day and We Learn What Christopher Robin Does in the Mornings" and "In Which Piglet Meets a Heffalump").

Notable for being the second traditionally-animated theatrical Disney film post-Home on the Range (and, to date, the last in the canon altogether before shifting to entirely CGI), as well as the fourth sequel in the Canon.

It's also the first Winnie the Pooh project handled by Walt Disney Animation Studios since A Day for Eeyore back in 1983.note The Pooh films in the 90s and 2000s were done by Disneytoon Studios.

To compensate for its short runtime, the theatrical release opened with the short cartoon The Ballad of Nessie.

If you're looking for other Disney Pooh media, or to get linked into it, see here.

Winnie the Pooh provides examples of the following tropes:

Owl has some explaining to do.

Owl has some explaining to do.