Music / New Kids on the Block 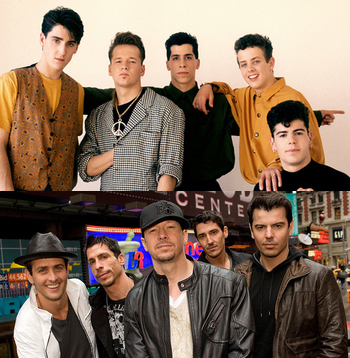 New Kids on the Block, or NKOTB, are a Bostonian Boy Band. For whatever reason, their manager Maurice Starr named the group Nynuk when it first formed (to this day, nobody is quite sure what he was thinking). Thank Donnie Wahlberg and Columbia Records for the group's current moniker; Donnie wrote the song "New Kids on the Block" for the first album, and Columbia said they'd give the group a record contract provided they changed their name. The rest is history.

Originally conceived as a white version of New Edition (seriously), they were hugely successful in the late 80's and early 90's, but declining sales, internal strife, accusations of lip-syncing and other issues, and sheer burnout led to the group disbanding in 1994. Most of the members went on to solo musical careers, and Donnie Wahlberg became a successful actor. They got back together in 2008, released a new album, and held a very successful reunion tour

and a tour in 2011 co-headlining with the Backstreet Boys. A new album was released on April 2, 2013, along with a joint tour with Ninety Eight Degrees and Boyz II Men. They toured in 2015 with Nelly and TLC, in 2017 with Boyz II Men and Paula Abdul, and in 2019 with Debbie Gibson, Tiffany, Salt-N-Pepa, and Naughty By Nature. A 2022 tour featuring Salt-N-Pepa, En Vogue, and Rick Astley was announced in October 2021.

They also had a short-lived animated series in the early 90s.

NKOTB is one of the Trope Codifiers, if not Trope Makers, for subsequent Boy Bands.