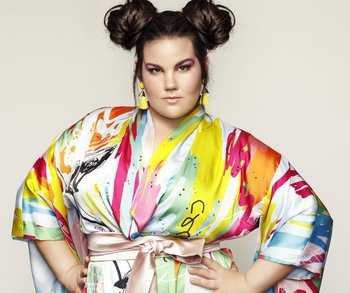 Netta is best known for winning the Eurovision Song Contest 2018 with the song "Toy", giving her country their fourth win, and their first since Dana International's "Diva" in 1998.

"Toy" beat runner-up "Fuego" (by Cyprus' entrant Eleni Foureira) by close to a hundred points; she also received the most votes from viewers across Europe, and still won the whole thing despite only coming third in the jury vote.

Prior to winning Eurovision, Netta performed as a DJ at parties, and utilized her skill whilst competing in the fifth season of HaKokhav HaBa, which is also used to determine Israel's Eurovision entry.

In spite of touring the US, and carrying out a headline tour of UK, France, and German-speaking countries, as well as performing in massive LGBT festivals for crowds in their thousands in Spain, Sweden, and back home, all prior to releasing a follow up to "Toy", which was the first song to receive 100 million views on the ESC's YouTube Channel (and had already became its most viewed video before May was over), she was still living in a flat, a complete contrast to the prices lavished on her costumes and music videos, such as that for follow up "Bassa Sababa", which was filmed in Kiev for a national record budget.