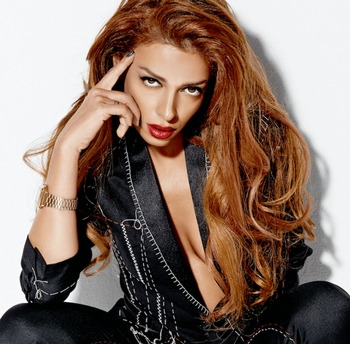 Foureira is best known for representing Cyprus in the 2018 Eurovision Song Contest with the song "Fuego", which was originally intended for Greece's 2005 winning act Elena Paparizou; she previously attempted to represent Greece at Eurovision in 2010, 2013, and 2017. Quickly becoming a favorite to win the whole thing after her semi, in spite of courting controversy by carrying out the Albanian Eagle gesture alongside their act (which most celebrities of Albanian or Kosovar ethnicity do, most famously used by Kosovar-Swiss footballers Granit Xhaka and Xerdan Shaqiri at the World Cup), leading to some in Greece questioning her loyalties, "Fuego" ultimately finished second in the final to Israel's "Toy" by Netta, givng Cyprus their best-ever result at Eurovision. (Ironically, Greece's own entry "Oniro mou" (by Yianna Terzi) got the country its second-ever non-qualifier since the semi-finals were established in 2004.) She instantly became a sex symbol and an LGBT icon and is followed by renowned musicians such as Bebe Rexha and Little Mix member Jade Thirlwall. Her first song after "Fuego" was a cover of the song "Caramel" by Moshe Peretz, which was written by "Toy"'s songwriter Doron Medalie, who advertised it as Greece's song of the summer. She has a strong association with the writer/producer/LGBT activist after releasing a Greek language version of Israel's 2015 entry (written by Medalie) "Golden Boy" by Nadav Guedj (the translation of this version is completely different to the original) off the back of that year's contest, and she would gig alongside Nadav in late 2018. She also had a submission for the 2016 contest written by Medalie. Foureira has also released at least 2 separate songs since, "Tomame" and "Triumph". She also appeared alongside Snoop Dogg in a song called "Sirens" by Turkish-born rapper KAAN, based off "Sweet Dreams" by the Eurythmics. She returned to Tel Aviv for the 2019 ESC's unique interval act, where she did a unique rendition of the "Dancing Lasha Tumbai" by Ukrainian cult act Verka Serduchka in a nude coloured leotard which contained over 250,000 crystals, whilst Mans Zelmerlow covered "Fuego", and Conchita covered the Swede's song. The four acts joined up alongside 1979 winner Gali Atari. Foureira also finally announced a first new album since her whirlwind 2018-19 period.

Prior to her participation at Eurovision, Foureira performed as a member of the Greek girl group Mystique from 2007 to 2009. She began a solo career for herself shortly after, and has released a total of four studio albums to date.

She's also known for her involvement in reality competition programs. In 2010, she won the first season of Greece's celebrity singing format Just the Two of Us with Panagiotis Petrakis. As of 2017, she's also served as a judge on the Greek version of So You Think You Can Dance.