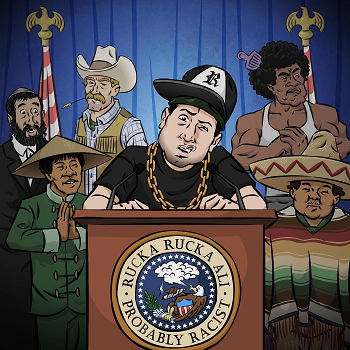 "Black people are great at stealing stereos
They've got Jewish lawyers in court
Muslims are the best at flying into stuff
(Not all Muslims, just most, and all it takes is most)
Africans like lynching homosexuals
Cubans turn dildoes into boats
Germans kidnap girls and make them prostitutes
Everyone's special in their own gay little way"
—Rucka Rucka Ali, I Love Minorities [California Gurls]
Advertisement:

Rucka Rucka Ali (born January 27, 1987), real name unknown, is an Israeli-American singer-songwriter & radio personality infamous for his hilariously offensive parodies of modern pop songs that score high on the charts. This infamy became especially apparent when his song Ching Chang Chong [parody of Boom Boom Pow] was taken down by YouTube because they thought it was a hate song. Rucka responded with two protest songs called Me No Rikey YouTube [ Down] and No More DJ Nice Guy [Break Your Heart], and it wasn't very long before YouTube deleted these two as well as other tracks from Rucka's discography.

Ever since then, Rucka has kept taking pop songs from the charts and parodying them in his favorite Refuge in Audacity style, while YouTube has continued to take these videos down and Rucka's fans (known as "Nuckas") have constantly been re-uploading the videos that YouTube have taken down.

Although his official site can easily be found here

, he seems to have no single YouTube page ever since the video removal got to account suspension levels, which has also made searching the site for his name

a much easier way to find any of his songs/videos.