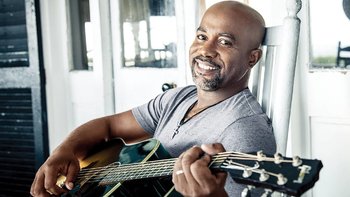 Although he is known mainly as the frontman of Hootie & the Blowfish, Darius Carlos Rucker (born May 13, 1966) is also a prominent Country Music singer.

Rucker had a few solo credits during the heyday of his band, including backing vocals for Radney Foster, a cameo in Friends, an appearance at Frank Sinatra's 80th birthday party, and even an R&B album. He also appeared on a celebrity edition of Who Wants to Be a Millionaire? and hawked the Tendercrisp Bacon Cheddar Ranch for Burger King.

After Hootie & the Blowfish went on hiatus in 2008, Rucker began pursuing his career in country. He signed to Capitol Records Nashville and, working with Record Producer Frank Rogers (best known for his work with Brad Paisley), issued Learn to Live. The album's debut single, "Don't Think I Don't Think About It", made Rucker the first African-American to have a #1 on the Hot Country Songs charts since Charley Pride in 1983. Three more singles from Learn to Live also fared well on the charts, as did two more from Charleston, SC 1966.

Although his third album True Believers had a false start with its lead single, the followup was a rendition of the popular bluegrass song "Wagon Wheel"; featuring Lady Antebellum on backing vocals, it became Rucker's biggest hit to date. The hits have cooled down some since then, but Rucker has remained a steady presence on country radio.