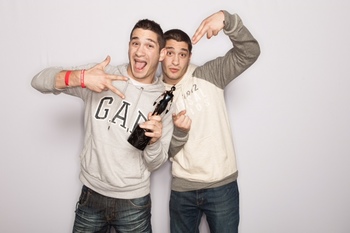 Not pictured: The most violently destructive character they are famous for.
Advertisement:

Danny and Michael Philippou, RackaRacka, are a couple of batshit insane YouTubers. They make comedy skits full of outrageous and bloody grossout humor. They particularly stand out because, despite being independent and amateur content creators, their crew can generate Hollywood-level practical effects and stunts. They're most famous for their twisted interpretation of Ronald McDonald.

Their videos provide examples of: