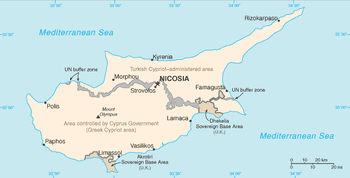 Like The European Union's customs laws, this entry only covers the area of Cyprus under effective control of the Republic of Cyprus. For the Turkish side, see Northern Cyprus. For the British bases, see Akrotiri and Dhekelia.
Advertisement:

Cyprus (Greek: Κύπρος; Turkish: Kıbrıs), officially known as the Republic of Cyprus (Greek: Κυπριακή Δημοκρατία; Turkish: Kıbrıs Cumhuriyeti) is an island and Southern European/Western Asian country in the Mediterranean. It gained independence from the United Kingdom in 1960. In 1974, Turkey invaded the north of Cyprus and the local Turkish Cypriots declared a separate state.

Historically, the island has frequently been passed among various Mediterranean empires with only rare periods of true independence - Richard the Lionheart captured the island for England during the Third Crusade (despite it belonging to the Byzantine Empire he was supposed to be helping), then sold it to Guy de Lusignan, a French noble who had been declared King of Jerusalem but had been defeated and lost his kingdom. The Lusignans ruled Cyprus for a few hundred years before dying out and the island passed to the Venetian empire, and was then conquered in 1570 by the Ottoman Turks, who kept it until 1878 when it was given to the British as war booty following the Russo-Turkish war.

The Republic of Cyprus is a member of the European Union. It's notable for being a flag of convenience, tourism, always giving Greece ''douze points'' and the two British military bases. These last ones are actually British territory.

The name "Cyprus" may come from the cypress tree, a Greek word for henna, or a word for copper, which was plentiful on the island in ancient times. It gave us copper, though, which was called aes Cyprium, metal of Cyprus, in Latin.