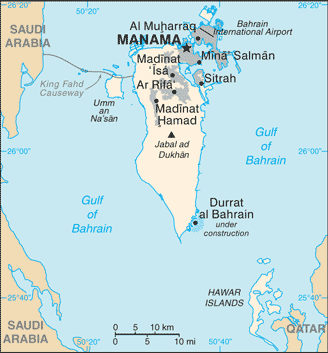 Bahrain (Arabic: البحرين‎ al-Baḥrayn), also known as the Kingdom of Bahrain (Arabic: مملكة البحرين Mamlakat al-Baḥrayn) is a nation in Western Asia. It is an island country, but is connected to Saudi Arabia via the King Fahd Causeway, and is the smallest of the Arab Gulf States. Like the other Gulf States, it is Muslim, Arabic-speaking, and was until recently dependent on oil revenues. It is now considered to have the Gulf's first "post-oil" economy. Its strategic location in the middle of the Persian Gulf made it an important crossroads for trade.
Advertisement:

Originally home of the prehistoric Dilmun Civilization, the island spent most of Classical Antiquity being ruled by the ancient Assyrians†  (not to be confused with the Aramaic-speaking Arab Christians that the term refers to in the modern day) and Babylon. After that, it fell under the control of the various pre-Islamic Persian Empires – Achaemenid, Parthian, and Sassanid. Bahrain was one of the first places to convert to Islam, in 628 CE. Over the next ten centuries, the island was controlled by various successive Arab kingdoms and Caliphates, most notably the Umayyads.

It was ruled by Portugal for around 80 years (from 1521 to 1602, to be precise). After that, the now-Islamized Persian Empire (Safavid Dynasty) took over, and would maintain control – aside from a couple of failed invasions by Oman – for the next 180 years. The long stretch of Persian rule during this period, something modern-day Iran is quite quick to point out, is almost certainly the reason why the majority of Bahraini citizens follow Shi'a Islam. After that, a Sunni tribal group from the mainland which included the Al-Khalifa family (Bahrain's current rulers) seized power.

Beginning in the early 19th century, Bahrain began to fall under Britain's sphere of influence following a convoluted Succession Crisis where both Oman and the Sauds tried to install rulers; the British opted to recognize the Al-Khalifa family instead. The Al-Khalifas attempted to outsmart their rivals, pitting the large kingdoms surrounding them against each other to maintain their own independence, but this eventually failed, with Britain slowly assuming more control as the century progressed, making it a Protectorate in 1880 and taking over outright in 1892, governing it from Muscat, a post which was an administrative offshoot of The Raj, of all things. This led to the islands' culture getting a slight Indian influence. It was during this period (1930's to be exact) that oil was discovered, turning the sleepy islands previously known for pearl diving and regional trade into a major economic power overnight. It was also during this period that Iran attempted to reassert its claim of sovereignty over the islands, which Britain laughed off – they liked having a bulwark in between Iran and Saudi Arabia.

Bahrain regained full independence in 1971, still under the control of the Al-Khalifa family, and immediately declared itself an ally of the West and of Saudi Arabia. It's the home base of the U.S. Navy's Fifth Fleet, making it an important staging ground for all NATO operations in the Middle East. Beyond that, oil wealth has transformed the little island into one of the richest, most advanced countries in the world.

Wealth doesn't always equate to peace, however, nor does it always bring freedom. One major point of contention in Bahrain is the fact that the ruling family is Sunni Muslim while the majority of the population is Shi'a. The Al-Khalifas, absolute monarchs in all but name, have long been known for giving preference to the minority Sunnis while the majority lack any real political power… and dissent against the ruling class is, shall we say, frowned upon (the kingdom has a poor human rights record and press freedom is minimal). These frustrations boiled over when Shi'as protesting the ruling class threatened to open a new front in the Arab Spring. Although there were also some Sunnis unhappy with the government, many in power suspected Iranian involvement in the protests (which Iran denied). In response, King Hamad Al-Khalifa turned to his old friends, the Saudis, who promptly sent in troops to help brutally crush the protests.

As one would expect of a Persian Gulf country, the citizen population is almost entirely Muslim (but unlike most of its neighbours, being a Muslim is not necessarily a prerequisite for citizenship – there are a small number of native Christians and a few dozen native Jews left). However, there is an extraordinarily large population – as in, the majority of people who actually live there – who are non-citizens, mostly migrant workers from South Asia. They're the people who build all of the kingdom's new trappings of modernization.

Bahrain is also home to the Bahraini Grand Prix stadium, a massive investment for so small a country. 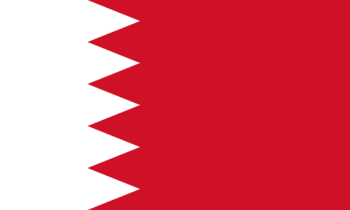 Red and white are common national colors in the Persian Gulf. In Bahrain's case, both colors are divided by a serrated line, whose five points symbolize the Five Pillars of Islam — Shahadah (pledge of allegiance to God), Salat (five ritual prayers a day), Sawm (fasting during Ramadan, ninth month of the Islamic calendar), Zakat (charity to the poor) and Hajj (pilgrimage to Mecca at least once in a lifetime).
The coat of arms of Bahrain 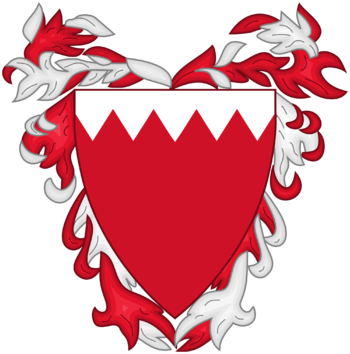