"O Cameroon, Thou Cradle of our Fathers,"
"Holy Shrine where in our midst they now repose,.."
—English version of the anthem
Advertisement:

The Republic of Cameroon (French: République du Cameroun) is a Central African country located right in the corner where West Africa curves southward and borders the Bight of Bonny, the primary component of the Gulf of Guinea. Also affectionately called "Africa in miniature" due to having Africa's variable environmental spectrum inside one border, including beaches, rainforests, highlands and mountains, savannahs, and deserts. Contrary to popular perception, the country's name is not and has never been related to the Gaelic surname "Cameron", though the British probably conflated them while doing a transcript of the original Portuguese byname of the region, Rio dos Camarões (Shrimp River).

The high Adamawa Plateau, located in the center of Cameroon, has historically divided the country into two cultural and linguistic regions. The fertile and rainforest-laden south is primarily inhabited by the Christian Bantus and Semi-Bantus, while the dry and savannah/desert north is the home of the Muslim Fula and Afroastiatics, including the Hausas and Arabs. There is also a further division in the south between the Protestant northwest and the Catholic southeast, which reflects the country's peculiar colonial history as a colony of two powers: the British and French, as a result of the League of Nations mandate that took away the region from Imperial Germany, which ruled it since 1881, after World War I.

Has been ruled by authoritarian regimes since independence in 1960; so far, there has been two presidents, one of which is handpicked by the other, and they came from the same political party, the Cameroon National Union (CNU), later morphing into the Cameroon People's Democratic Movement (CPDM), which banned opposition until late 1990. Interestingly, the first president, Ahmadou Ahidjou was a Muslim Fula, while the president he picked as successor, Paul Biya, was a Catholic Bantu, showing that whatever rivalry the country has, it's firmly political. Indeed, the country exhibits the interfaith goodwill of Central Africa the greatest, especially after neighboring Central African Republic screwed it up royally and horrifically in the 2000s.

Currently facing Africa's typical societal problems including poverty, underdevelopment, and rampant illnesses. A minor separatist movement since the institution of multi-party democracy has arisen in the former British northwest to cause headaches to the government for some time. Since the outbreak of the civil war and violence in CAR, Cameroon has also been hosting the largest count of refugees from the country. Recently, the insurgency of Boko Haram in northeastern Nigeria has occasionally spilled over to its neighbors, and Cameroon and Chad have pledged to form The Alliance with Nigeria in an effort to combat the radical group.

A member of both the La Francophonie and the Commonwealth of Nations by virtue of its association with France and Britain. French culture takes a dominance, though, as the British legacy is only limited to the small but populous northwestnote The other part of the British Cameroon preferred to join Nigeria instead.

Football/soccer is the national sport. Cameroon's football team is one of Africa's best, having won the African Cup four times and a gold medal to boot in the 2000 Summer Olympics. 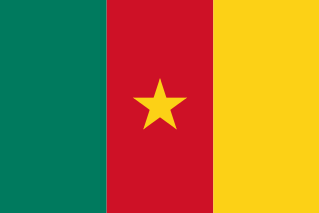