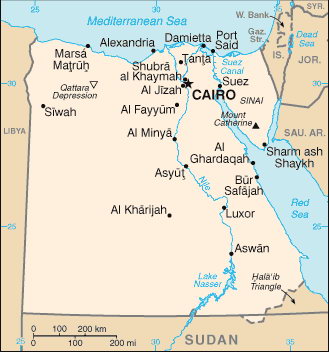 Egypt (Arabic: مصر‎ Miṣr), officially known as the Arab Republic of Egypt (Arabic: جمهورية مصر العربية Ǧumhūriyyat Miṣr al-ʿArabiyyah) is a republic in North Africa and Western Asia. The country is mostly desert, except for a thin strip along the Nile, plus a triangular bit (the Delta) where the Nile meets the sea. The Nile Valley/Delta is among the most densely-populated regions on the planet, and they light up like a Christmas tree—or perhaps Ramadan lamps—at night, so they are very, very visible from space. Egypt is traditionally divided into Upper Egypt and Lower Egypt, with Lower Egypt being the northern part of the country (i.e. the Delta), and Upper Egypt being the parts south. Where Upper Egypt meets Lower is Cairo, the nation's capital, and at 20 million-some inhabitants Africa's largest metropolitan area. The famous Pyramids are also there, and Memphis—the capital of the Old Kingdom—is not too far away, as is the old fort that served as the main Roman and Byzantine garrison for the province of Aegyptus/Aigyptos, proving that some places are just more strategic than others. Arabic is the official language and the language of the people, but the issue is kind of... complex. For that matter, its history and culture are also rather complex; see History of Modern Egypt for details.

Although Arabic is the major language of Egypt, the majority of Egyptians are not ethnically Arab according to the traditional definition; rather, your average Egyptian descends chiefly from the actual Ancient Egyptians, with at most a small number of ancestors hailing from the Arabian Peninsula. Whether or not Egyptians ought to be considered Arabs anyway is a point of contention. The Coptic Christian minority tends to identify more with Egypt's native ethnic group — Copts — seeing Arabization and Islam as hand-in-hand representations of foreign invaders (they still speak Arabic as a first language, of course, and Coptic only as a liturgical language). It should be noted though that the term "Copt" was first coined by the Arab invaders who didn't really have their own word for Egypt at that time. What they did was to take the Greek word Αἴγυπτος (Aigyptos) and then remove "Ai" which they wrongly assumed to be a redundant definite article, as well as what they correctly identified as an obligatory noun suffix "os", thus giving rise to the term "Gypt", which, due to the peculiarities of the Arabic script and pronunciation would overtime be corrupted to the present-day "Copt". Thus, when we talk about "Coptic", what we actually mean is "Egyptian", and there are plenty of Coptic-DNA Muslims whose ancestors just never happened to intermarry with ethnic Arabs, yet in the eyes of society they're just as "Arab-Egyptian" as 90% of the population. All in all, while most modern Egyptians aren't exactly as closely related to their pyramid-building ancestors as, say, modern Greeks are related to the likes of Homer and Aristotle, a parallel with present-day Italians and ancient Romans would probably be quite fitting.

The Muslim majority is more divided. Some emphasize a common Arab identity, others prefer an Egyptian one, and still others prefer to identify with the Muslim Ummah (community of believers) as a whole. Many more, perhaps most, see no contradiction between the three. Anyhow, as in the rest of the predominantly Muslim world, religion is the most crucial aspect determining societal divisions, even if a sense of nationalism is rather deeply rooted in Egypt. Due to its commendable past, sheer size and the dominance of the Egypt-based media and entertainment (explaining the fact why Egyptian Arabic is widely understood all throughout the Middle East and Maghreb), Egypt has always been looked up to with respect and attention by its fellow Arab countries, even those much wealthier.note When President Sadat signed a peace treaty in Israel, it sent a shockwave throughout the Arab world, with many considering Egypt to have backstabbed the entirety of the Arab world, whereas others interpreted it as proof that since even the great Egypt admitted that Israel was apparently undefeatable, there was no point in prolonging hostilities.

In fact, the above situation is not unique to Egypt. The vast majority of what are currently called "Arab countries" are populated by descendants of the same people who lived in that land centuries ago. The rest of North Africa — Algerians, Libyans, Mauritanians, Moroccans, Sudanese, and Tunisians — are of the same basket as or even more dissociated than Egypt when it comes to Arab identity. In many cases, calling Algerians, Moroccans, and Tunisians "Arab" will result in a swift uppercut to the head. They have a history that is separate from the eastern Arab world since the Middle Ages, are proud of their Berber heritage and French colonial history, and won't take kindly to being lumped with other Arabs. The fact that their Arabic dialects are nigh-incomprehensible to eastern Arabs doesn't help matters. The eastern population of the Arab world sans the Arabian heartland — Iraqis, Jordanians, Lebanese, Palestinians, and Syrians — are more receptive to the term "Arab", but the same case still applies to them. It's arguable than the concept of nationalism is slowly creeping to them as well; some Lebanese have begun to emphasize their Phoenician heritage more following their horrible 15-year long civil war. Remember, the Arabian peninsula is mostly a huge tract of desert with the odd oases scattered about. The peninsula was and is much less populated than other regions of the Arab world, including the Nile Delta. Although some Arab tribes migrated and settled in the conquered lands of the Caliphate, they certainly didn't completely replace the indigenous inhabitants of the area.

Egypt, by dint of its large population (94 million out of ~300 million Arabic speakers) and other factors, is widely considered to be the center of Arab culture today: a very large proportion of Arab movies, Soap Operas, music and literature come out of Egypt. In fact, the joke in Arab high culture is that Egypt writes, Lebanon publishes, and Iraq reads. The cultural impact of Egypt is great enough to deserve a separate articles: Egyptian Media.

Despite what you see in the media, the numbers of Egyptians still worshiping Ra, Osiris and the others are not thought to be great. It's largely a Muslim country (80% to 90%) with a Coptic Christian minority. Those that do are probably more numerous outside of Egypt than within. For a more relevant delve into contemporary Egyptian lore, see Arab Mythology.

Egypt is still famous mostly as the home of the Pyramids, the Sphinx, the Valley of the Kings, and lots and lots of temples, to say nothing of the Suez Canal. 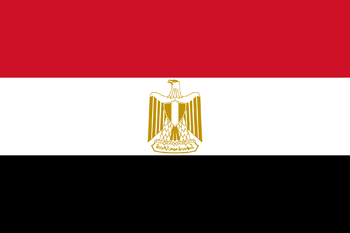 Red stands for the revolt of military officers in 1952 against King Farouk, white for the bloodless outcome of their revolt, and black for the centuries of British colonial rule; at the center is the coat of arms.
Coat of arms of Egypt 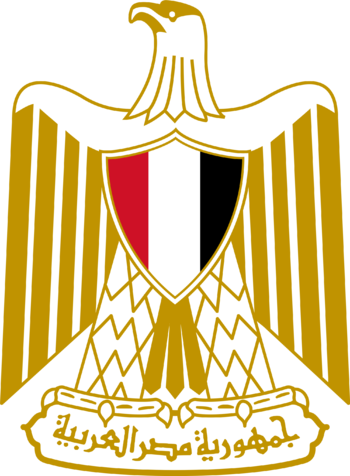