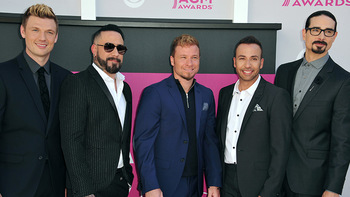 If you are thinking of a Boy Band, chances are the first that pops up in your head will be the Backstreet Boys. Formed in 1993, they became hugely popular after debuting in the States in the summer of 1997. The five original members were A.J. McLean, Howie Dorough, Brian Littrell, Nick Carter, and Kevin Richardson. Richardson left in 2006, making them a four-man group for a while before he permanently returned to the band in 2012.

The group was formed by airline mogul Lou Pearlman, who had leased one of his airplanes to New Kids on the Block and realized there was money to be made in a clean-cut band of boys. He recruited local talent from Orlando and spent the first half of the '90s training them in singing and choreography. After plenty of legal troubles, the group became first famous in Europe, and then became the Boy Band for girls to swoon over in the U.S., being a major part of late-'90s pop culture. After even more legal troubles (specifically, a horrible contract which allowed Pearlman to take a massive fraction of their profits), the band left his management and have continued to perform ever since.

As time went on, the Boys became good friends with the New Kids, the very group they were capitalizing on, eventually forming a boy band supergroup NKOTBSB, as well as Nick Carter and Jordan Knight's superduo, Nick and Knight.

The band has sold over 130 million records worldwide, making them one of the biggest selling groups of all time. According to Billboard 200, they are the first group since Sade to have their first seven albums reach the top 10 on the chart.