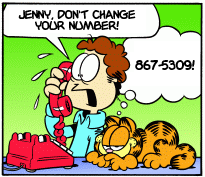 The phone number 867-5309 appears in the chorus of the 1981 Telephone Song "867-5309/Jenny" by the band Tommy Tutone. The song is about a guy who finds the phone number of a girl named Jenny on some Bathroom Stall Graffiti. The song quickly became a hit, and Jenny's number got stuck in pretty much everybody's head. People started dialing this number and asking for Jenny, and many of those unfortunate enough to have this number had it disconnected. Nowadays, this phone number is a popular bargaining item for businesses looking for a memorable number.

Since the fallout of heavily popularizing 867-5309 has already happened, the number is often included in works as a stock phone number and Shout-Out to the original song. Often the number itself is just an Easter Egg for those who closely examine a seemingly random 7-digit number.

Compare to 555, another stock phone number.

Stewie tries to call home, but the only phone number he knows off the top of his head is Jenny's.

Stewie tries to call home, but the only phone number he knows off the top of his head is Jenny's.