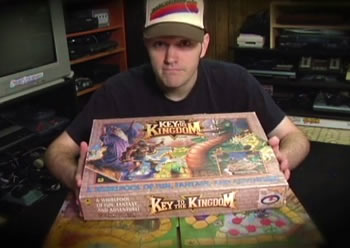 When Board James is bored, he plays some board games.
Advertisement:

Board James is a Cinemassacre Web Video series, created by and starring James Rolfe. You can find the series here

Board James is a pretty normal guy, a kid at heart who collects a great variety of Board Games as a hobby and reviews them. Sometimes Board James does his reviews alone, but from time to time he's joined by his best friend Motherfucker Mike, who is a bit of a cheater when it comes to playing the games. And when there's a place on the board for an extra player, there's Bad Luck Bootsy, an annoying but friendly guy who is prone to ruining the games and who causes nothing but trouble to James, Mike and himself.

The series started out as a Spin-Off of Rolfe's most famous work The Angry Video Game Nerd but later became its own series. In its infancy, it followed the same Mid-Review Sketch Show formula that Rolfe helped popularize as the Nerd, but featured a much less enraged style of reviewing, often focusing on the good of the games. However, it would eventually carve its own path by developing a Myth Arc in its third season that was shockingly dark, complex, and surreal for a show that started out as goofy and humble as it did.

The show was put on hiatus in April 2013 after the episode on Dream Phone, the series' first foray into the aforementioned darker storyline. According to Rolfe, he had plans on continuing the series with a new season, but had fallen behind due to working on the Nerd's movie. He promised that more episodes would come, and made good on that vow when the series returned on April 1, 2015.

The finale of the third season came out on December 4, 2015 and centered around the board game Nightmare of the Atmosfear series while incorporating numerous other board games within it. While James originally said that the series wasn't over yet and was just on another hiatus, he has since said that he has no plans to continue the series, and with both Mike and Bootsy having parted ways with Cinemassacre, it's likely to stay that way.

open/close all folders
Board Games reviewed (in chronological order)