Webcomic / Square Root of Minus Garfield 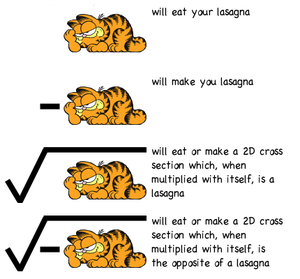 The many forms of Garfield, including the square root of his inverse.

A subset of the webcomic mezzacotta. Essentially, it's Garfield Minus Garfield turned Up to Eleven: a collection of humorous Garfield edits made by viewers. These edits often change the dialogue, or combine artwork from multiple Garfield strips. Some of the contributors read TV Tropes and use the tropes in their strips.