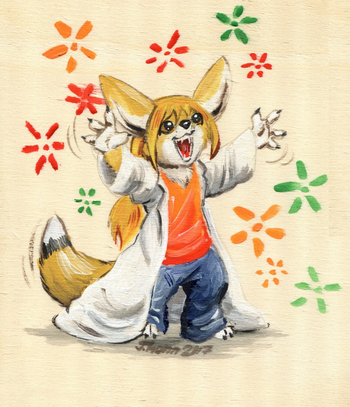 Celia, the main protagonist, as a fennec fox.
Advertisement:

Addictive Science is an ongoing adventure, comedy, drama and science fiction webcomic written and drawn by Cervelet since 2009. It is hosted by Kemono Cafe and can be found here

The comic features the adventures and misadventures of Celia, a mad scientist, and her roommate Lukas, a notable deadpan snarker who is also a ninja in his spare time. The cast is composed of quite a bunch of people, some humans, some not, and all subject to rampant experiments. It's mostly made for fun.