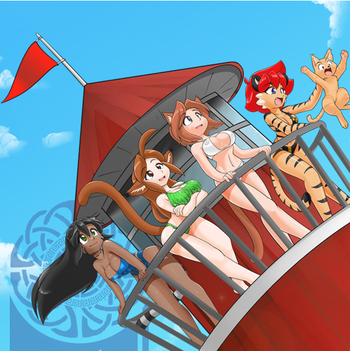 Caribbean Blue is one of a group of Furry Webcomics in Kemono Cafe, which can be read here

Written by Ronaldo Rodrigues (also known as Nekonny), Caribbean Blue takes place on a tropical island for what where three friends think is going to be nothing more than a relaxing vacation, only to be received by the locals as the heroes of legend reborn! This apparent misunderstanding is due to the fact that, as the heroine before them, they are all unique cat hybrids; Tina Vermillion: a tiger nekomimi, Yuki Keystone: a lynx nekomimi, and Nekonny: a human stuck in the body of a cat. The would-be heroes aren't quick to believe that they are anything special, but fate keeps putting further evidence that there is more to the legend than the local's stories alone. When they meet the nekomimi Maya working in the local inn, they feel that this legend may not only be real, but may contain the secrets that will give Nekonny his human form back and through it, his normal life.

As of 2014, the comic has reached its conclusion.