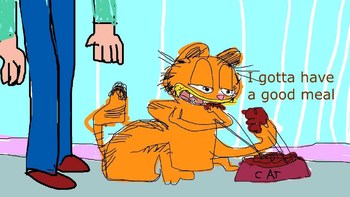 I'm am hungry I want some lasaga
Advertisement:

I gotta have a good page

Garfielf is a video by PilotRedSun. As you can tell by the picture on the right, it's a very... strange parody of Garfield, to say the least. To sum up the video, Jon constantly gets angry about what his cat's doing in the house, including kicking Odie off a table and eating everything in the house just to name a few. The video has to be seen to be believed. Here it is.

Eventually, it spawned a whole series of videos (not made by Pilot), keeping the same style. One such series even has its own article.

i ate those tropes about the original

i ate those tropes about fanvids

Jon: where did The Stinger go
Garfielf: *brup*

I Ate Those Food

Example of:
Ate It All

I Ate Those Food