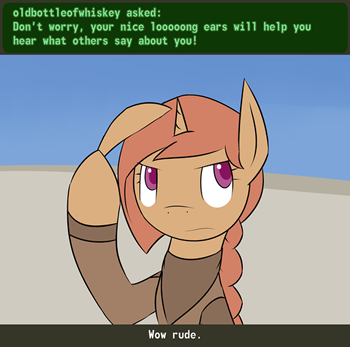 It's rude to insult a lady's ears.
"HI THERE MY NAME IS SIERRA DO YOU WANT TO BE MY FRIEND"
—Sierra Scorch displaying her unique social skills.
Advertisement:

was a recursive webcomic of Fallout: Equestria done in the style of MS Paint Adventures. Like the original, it was a crossover between My Little Pony: Friendship Is Magic and the Fallout universe.

The Equestrian Wasteland is an okay place to live. At least, for a caravan guard named Sierra Scorch, who gets by sleeping on the job most of the time. The skies are nice and clear, things look after themselves for the most part, and the job is easy going. And despite a lack of caps and a few mishaps with a repair or two, it isn't too hard going.

That is, until a large black cloud with a giant laser descends on the convoy, destroying nearly everything and everyone. In the aftermath, Sierra is pulled from the wreckage by the only other apparent survivor, an earth stallion named Wanderlust, and left wondering as to what happened. Throw in a trip to a creepy Stable and the future looks fairly uncertain.

Sadly the comic has since been canceled and domain expired. You can find an archive of the comic here