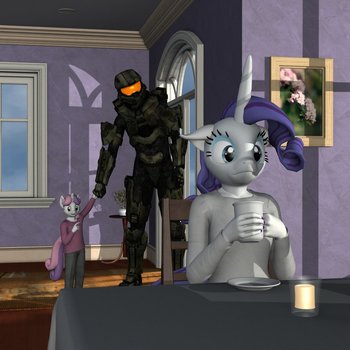 Hey, Sis, can I keep him?
One is a seamstress.
One is a squeaktoy.
One is a super-soldier.
Equestria's a hell of a place for a crash landing.
— The blog's tagline
Advertisement:

is a CGI webcomic/blog that answers the question: "What would happen if The Master Chief, after the events of Halo 3, crash-landed in Equestria and was adopted by the Element of Generosity and her little sister?"

The answer is hilarity.

While the concept is silly, and it does keep things light in tone, the story delves into other questions, such as "Why don't we see Rarity's parents in the show?" or "How does a Child Soldier like Chief deal with everyday life?" Overall, for such a crazy idea, it manages a nice combination of funny, tragic, and heartwarming.