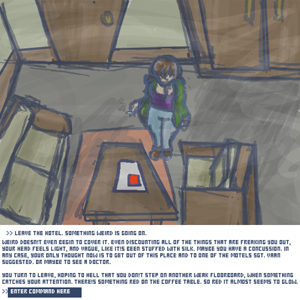 What do I do now?
>>Enter Command Here
Advertisement:

Silent Hill: Promise is a Fan Sequel Silent Hill interactive web comic created by Greer-the-Raven, currently hosted on both on deviantART and its own website. An attempt to create a full-fledged Silent Hill "game," Promise uses the faux Adventure Game style of MS Paint Adventures to involve readers in deciding what the heroine should do next.

Vanessa Sunderland is asleep in her bed in the early hours of the morning when her cellphone starts to ring. Picking up the phone, she recognizes the area code for the vacation town, Silent Hill, and picks up, hearing static before the voice of her missing Uncle James crackles through the line. He had been gone for three years, most thought he was dead and the phone dies before she can figure out exactly where he is.

Knowing exactly that this is what she had been waiting for, she throws on her clothes and heads straight away to Silent Hill, taking along the old wedding photo he had signed for her as a good luck charm.

When she arrives, the town seems normal on the surface, but the darkness is always creeping in...

Promise was updated daily and has an archive of 1178 pages. It stopped updating in late 2015, but resumed updating in June 2017. The ending was released as a game on on Halloween, 2019.

Read it on DeviantArt

or on its dedicated archive

which is finally up again. A readthrough of the comic is also available on Youtube