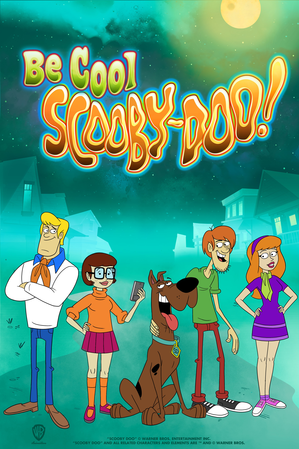 "Scooby and the gang are back! But not quite as we remember..."
Advertisement:

The twelfth incarnation of the Scooby-Doo franchise, and a Lighter and Softer spin on the series, Be Cool, Scooby-Doo! concerns the gang as high school graduates. Other than that, it's still same ol', same ol': They come to a supposedly haunted destination, split up to investigate, hijinks and chases ensue until the culprit is eventually unmasked by those meddling kids. The main draw of this series is that, along with a different and more simplistic art style, there's more focus on comedy and character interaction of the cast in between the mysteries.

It premiered on Cartoon Network and Boomerang (alongside Wabbit: A Looney Tunes Production) on October 5, 2015. It was cancelled in 2018, ending with its Season 2 finale.

Naturally Shaggy would be a fan of such a place, even if it's haunted by a haywire animatronic.

Naturally Shaggy would be a fan of such a place, even if it's haunted by a haywire animatronic.