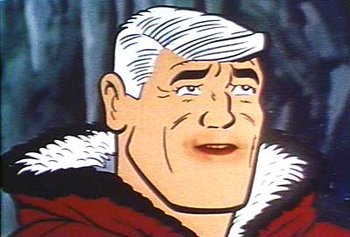 "My old man says he's cool, but not to make fun of his mouth!

"
"Why's everybody got lady lips? Are those human lips? Whose lips are those?"
— Frozone, the commentary of Mr. Incredible and Pals
Advertisement:

Synchro-Vox is an extreme form of "Limited Animation": A mostly obsolete technique in which footage of the actor's mouth is superimposed upon an otherwise non-moving image. See the other Wiki

. Can look pretty unnatural. A few lazier productions go one step further and also animate the eye movements this way.

Mentioned on the Dead Unicorn Trope page because only a very small number of productions used it straight, after which everyone immediately realized it looked really, really creepy and fake; anyone using it outside of those very few examples is probably going for comedic effect, Mind Screw or both. You can expect it to suddenly show up in other forms of animation as a Medium-Shift Gag.

Just as primitive Rotoscoping has given way to Motion Capture, the great-great-grandson of this technique can be found in the advanced facial performance capture techniques used in works like Avatar and L.A. Noire.

Jupiter and Saturn rap-battling each other in "The Solar System Song".

Jupiter and Saturn rap-battling each other in "The Solar System Song".