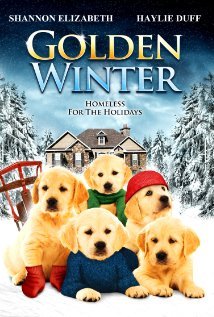 Golden Winter is a 2012 family film by The Asylum. A couple leaves their house before they can be evicted, leaving their golden retriever and her five puppies for the pound to pick up. By a series of accidents, the puppies get left behind in the house as their mother is picked up. Said foreclosed house is then broken into by a neighborhood gang who is introducing a new member, Oliver. In short order, the kids find the puppies, and their pedigree papers, and hatch a scheme to sell the puppies. Meanwhile, Oliver decides he needs to reunite the puppies with their mother. One failed attempt of petty crime later, the gang gets involved in the scheme of Freddy Fagan to steal money being donated to the local Boy's Club. Oh, and did we mention this is all set during Christmas and Oliver is dealing with two workaholic parents? And the dogs talk?

Oh, and being a The Asylum work, this direct-to-DVD movie with golden retriever pups is not a holiday themed entry of the Walt Disney Pictures franchise Air Buddies.